Black Basset Records is a DIY label, launched in Brussels in June 2013. It’s a labour of love, run by two music fans with a background in gig promotion. DIY is our credo. We were sometimes sick and tired of seeing quality bands and artists unable to release their own music decently, due to lack of funds or energy. So we decided to jump in and help them. Black Basset Records was born. Its ultimate motive: to release quality music on nice vinyl records. These records are also available digitally, but we have no plans to release CDs. None at all, don’t ask.

The first releases of the label are local bands we’ve met early on in their “career”. We saw them grow, we saw them live plenty of times, and we spent way too much time in bars with them. This led to the records that are now available. This also confirmed our decision to work mainly with bands that are local or at least connected to us in one way or another. Because all this malarkey is about mutual respect, don’t you know it?

What genres of music do you release through BBR?

At Black Basset Records, we want our releases to be just like us: not limited to one specific music genre. Because we listen to quite a lot of things, from hip-hop to black metal and from Chicago noise to folk music. So expect the unexpected and releases coming from all directions.

Do you still put up shows?

We do every now and then, but we only organize shows around “Black Basset Records bands”. We may make a few (rare) exceptions for people we owe a favour to, but that’s only because they know where we live and are likely to use violence if we don’t. Or because they are uber nice people we love.

This means basically that there is no point contacting us about putting up a show for you. We’ll find you if we have to.

I am in a very cool band and would like to send you a demo….

Feel free to, we’ll get back to you for sure. But keep in mind that our strategy for world domination is already in place and that we only work with people we know personally or are connected to one way or another. If you have never met us or don’t have a clue who we are, there’s no point really, even if your project is the coolest thing since sliced bread. Sorry!

We had a good laugh receiving a job application even before releasing our first record. If, while browsing this very website, you think that we look like an imprint of Universal Music, you may want to strongly reconsider your decision to “make a career in the music business”. Or buy new glasses.

Does that black basset really exist?

He does. He loves a good nap, barking in the park, belly scratches and good music. Because the black basset is a bit shy, it’s a mock-up impression of him we’re using as our logo. The logo was created by Punchkid: www.punchkid.be

We’re nice people, and we’ll answer any questions you may have: info@blackbassetrecords.com

This does not apply to people with three billions dollars blocked on a bank account in Nigeria though. 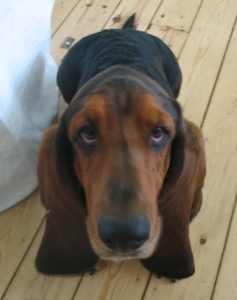